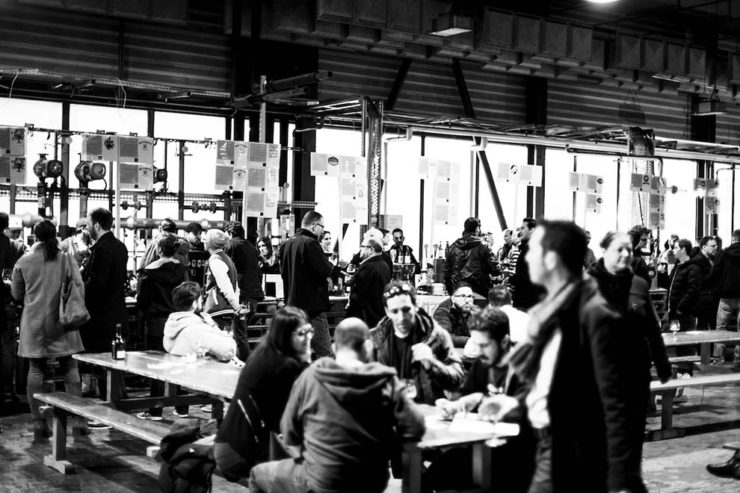 Wortspiele is what you get, when you produce 15 hl of wort; give it to more than 20 brewers who then make beer from it to serve at one event. We here at bierversuche organize this shindig and Number 3 just happened at La Nébuleuse. Mid-February people were treated to 35 completely different and exclusive beers.

Wortspiele is a bit of a beer nerds dream and beer rater’s nightmare: It is a beerfestival where only exclusive beers are poured. It goes like this: All participating brewers get together and produce a wort (e.g. at La Nébuleuse on November 26). This wort is split and shared with all participants who take it home and do a treatment of the wort. After a while everybody gets together again and serves the finished beers (e.g. at La Nébuleuse on February 11). All of this is reflected in the name of this beer festival: Wortspiele is a wordplay meaning, well, wordplay in German. The Spiele in “Wortspiele” means play or games. Put this all together and you have a bilingual term for “playing with wort”.

The third edition of this festival happened mid-February. Twenty brewers served thirty-five different finished beers that all started with the same wort. This may sound boring, but no two beers tasted the same, as it is impressive, what you can do with just one wort. While a lot of people drink beer, not everybody knows how beer is being produced: Brewers first produce a mash, which is a sweet liquid after water was mixed with crushed malt. Wort is the liquid after it was boiled and in most cases, hops were added. For creative brewers, wort is a canvas they can play with: They can use different yeasts, adding hops at different stages or fruits and spices. The options are infinite. As not everybody knows that, Wortspiele is an opportunity to talk to people about how beer is being produced while drinking delicious beers.

Experiments resulting in good beer
The location at La Nébuleuse was perfect for an event: It was huge and due to its industrial flair had enormous atmosphere. The hall was filled with 35 tapping systems so all beers could be served at the same time. While all were tasty, some stood out. They stood out because of the theatrics of adding ingredients after pouring, like at the stand of Brasserie Cinq 4000 from Zinal, VS or 7Peaks from Morgins, VS. Or by simply being delicious, like the Coconut Porter by Broken City from Lugano, TI, the Session Baltic Porter by CôteWest from Lausanne or the Lacto Mint Porter by L’Improbable, also from Lausanne.

We did this event now for the third time, and every time we are amazed that no served beer turned out bad or no two beers tasted the same. Well, the not turning out bad part is only half-right: Two breweries had to bow out before the event, as their beers didn’t turn out as desired. This, however, shows you that these beers are exclusive experiments and whenever you experiment, when you’re creating an artisanal product, things can go wrong. It basically means, this event is genuine.

It feels like one big collaboration
Wortspiele #1 had six participants, #2 had 16. For #3 there was a waiting list of breweries wanting to participate. We presume because these events feel like one big collaboration and more than just a one-day beerfestival. It is a project where the brewers come together to produce a wort, talk, share beers and get to know each other, as many have never met before. The event itself then feels like a reunion where new friendships are cemented and future projects plotted. La Nébuleuse were great hosts and made everybody feel welcome. Both Kouros and Jeremy were an integral part of this edition of Wortspiele and we are very grateful for their effort.

For us, the organizers of Wortspiele (who also includes Jan of BZW Bierzunft Wehntal and Sebastian, formerly of BrauBar and now of 523), future projects include an edition of the event in Austria and eventually a #4. We have some ideas about #4 and even had some very early initial talks. Many breweries already voiced their interest in participating in #4 or the Vienna edition and several breweries offered their space for the event. So there will be a #4.

Photo by Stefan Schaufelberger. More photos and tales about Wortspiele #3 are here.